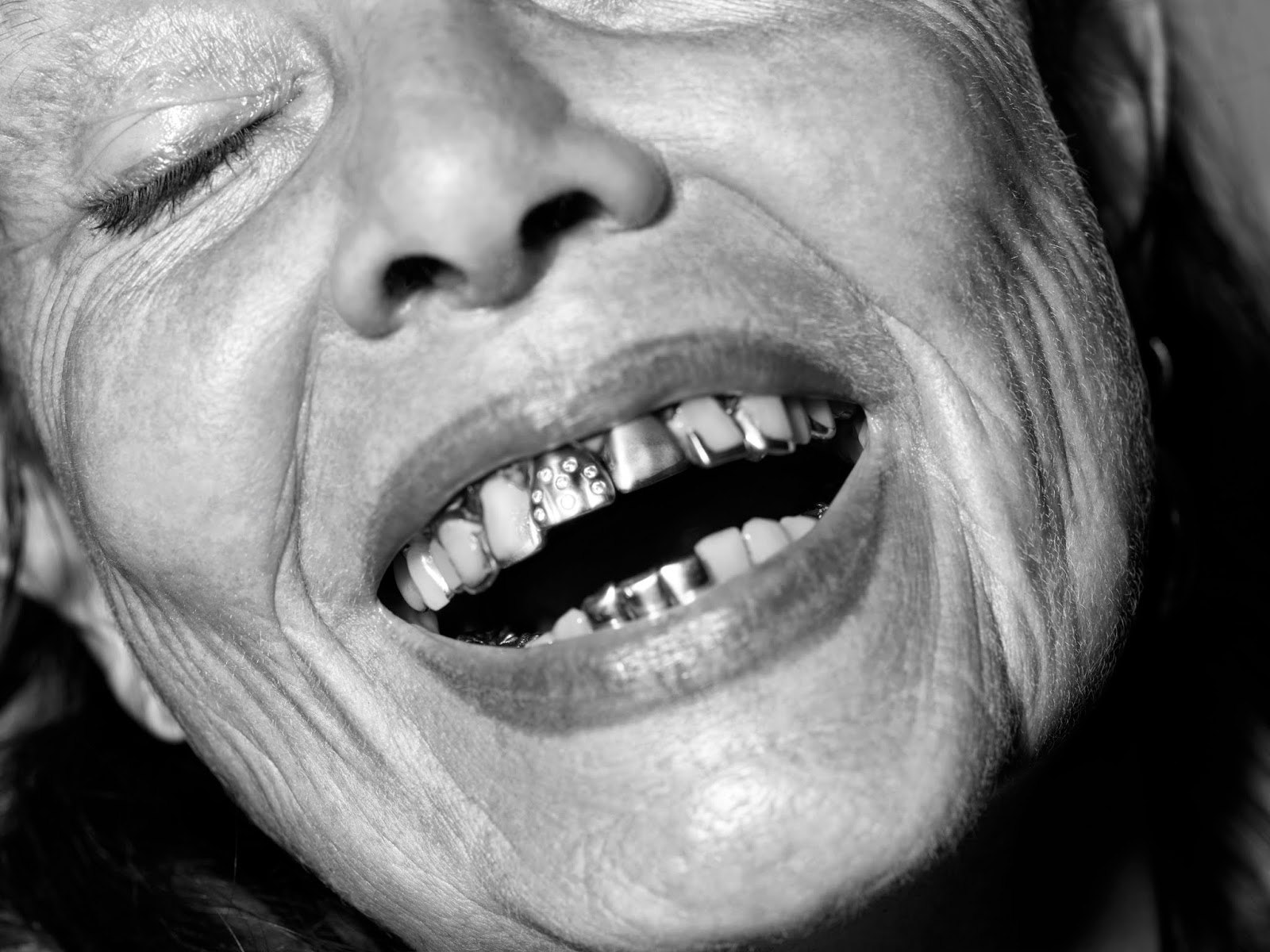 Michèle Lamy will bewitch you. Her forehead is lined not just with age but with intent. Her fingers are blackened purposefully with ink and her teeth are gilded. She is a woman who is not afraid to act on instinct, to pervert ideals of beauty and to be seen, heard and respected. But her appearance is just part of her subversive allure.

She is a maverick who has had many lives. Most notably she has been a fashion designer, restauranteur and most recently Rick Owens’ right hand woman and wife. “Who she is and how she presents herself is so much about bewitching people,” said Scarlett Rouge, Lamy’s daughter.

Michèle’s biography is difficult to write, but I think it’s important to include as much as possible. It highlights both her ability to make things happen and the self-mythology which is ingrained in the details of her life she made for herself. She is a woman who has done a great many impressive things, but the facts of her biography seem just that little bit too convenient. Her biography reads in a very convenient manner, which adds to her mesmerising allure. It builds up our perception of Lamy and allows us to qualify her as someone who has lived outside society’s rules and at the centre of many significant events. This shouldn’t take away from her many achievements, but I’m not 100% convinced that she managed to be present for so many noteworthy moments in recent history.

She was born, she says, in the mountainous French region of Jura, in a town known for producing luxury fashion accessories in wood, horn and ivory. Her grandfather made accessories for Paul Poiret, the french couturier who made ladies trousers fashionable for a brief period in the early 20th century. Between 1960 and the early ’80s Michéle’s life was – according to her – formed in part by sneaking into a series of lectures with empiricist philosopher Gilles Deleuze when she should have been at law lectures, in-depth conversations with evildoers (she practised as a criminal lawyer sometime in the ‘60s), stripping at a club and throwing stones with students in the Paris of 1968†, moving to New York to be seduced by the hedonism of Studio 54, The Factory and Andy Warhol, then abruptly abandoning her home in the Chelsea Hotel for the harsh sun and arid air of LA.

How much of the above is self-mythology and how much is hard fact we might never know, but this is the version of her life Lamy would like us to believe. It’s the most entertaining version of the truth that currently exists.

In LA, Michèle founded her eponymous fashion line and opened a boutique called Too Soon to Know on Santa Monica Boulevard. This venture was apparently very successful; according to a 1990 LA Times article, the business was, at one point, worth about ten million dollars. However, the only real evidence of its existence I could find was the aforementioned LA Times piece.

Admittedly, my resources are limited to internet searches and a handful of print magazine articles. But it seems strange that there are no images of any clothing online; no store front snaps, not even a label design. And yet, written written details of her ‘easy fitting and unconstructed’ silhouette and an accessible ‘$65 dollar price tag’ have been committed to print. Michéle, ever the sorceress, has managed to make all evidence of this time in her life disappear – from the internet, at least.

Lamy (rather magically it seems) has tailored events to fit the timeline of her life and (even more magically) has made an entire clothing range disappear – if anyone reading this ever saw any ‘Michéle Lamy’ clothing please let me know, I’m so very curious). After all, she has said that she, “can make something, or make something disappear…”

But by 1996, Lamy was running the now infamous Les Deux Cafes. This was an intoxicating but secluded space where famous actors could openly discuss the nuances of filmmaking and indulge in various vices without fear of a resultant media witch hunt. The cafe was adjacent to a nondescript car park, was hidden behind an unmarked door. Inside, her bewitching presence was moulded into the decor and personified by the staff she cast.

Les Deux Cafe was a place where Puff Daddy danced on tables and where Heath Ledger, Bill Murray, Nicole Kidman and Lenny Kravitz played parts in the scene that Michèle had somehow materialised. It had an allure that kept people coming back again and again, despite the intentionally appalling service and mediocre food.

Les Deux Cafes was at the height of its powers from 1996 to 2003. It only came to an end when one day Michèle left the door unlocked, the business unmanned and moved to Paris with her future husband and former employee Rick Owens. 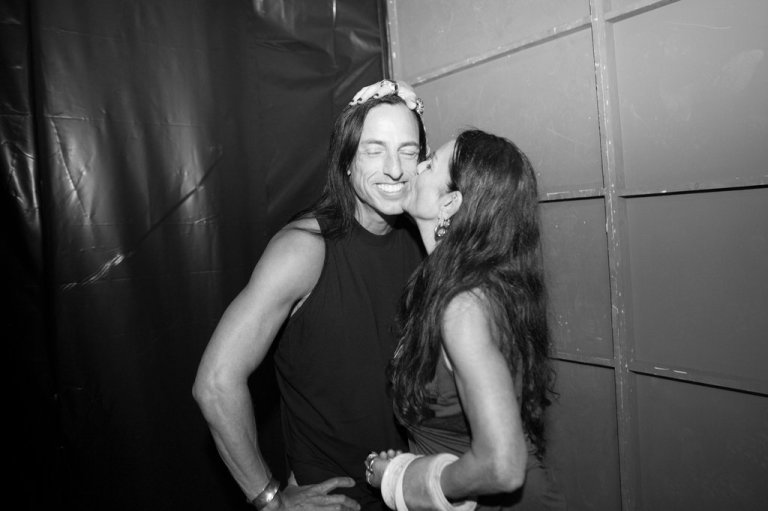 Michèle is perhaps best known for being both Rick Owens’ wife and collaborator. When asked about their relationship and the dynamic between them, Michèle speaks of a lack of separation of personal and professional. Their work is their life and their life is their work. In an interview with Sorbet, she stated that they were “not together to make babies” but purposefully to created both life and a lifestyle brand.

What people know, and both Owens and Lamy are very open about this fact, is that she entered into a marriage with a gay man. Time and time again, she refers in interviews to the platonic nature of their relationship. She, like historical witches, questions and calls attention to the boundaries of female sexuality. She is not married to a man in order to manufacture children. Instead, she is married to him to further her creative life.

Rick Owens – the brand – has a cult like following that has amassed a tribe of devotees who lap up its monumental minimalism. It is a proposal that would not be possible without Michèle. Rick attributes the main vision of the brand to his aesthetic, but has said that Michèle has much better instincts. Hers are those of rebellion and transgression against the limiting aesthetic rules of fashion. She subverts our ideas of what a fashionable woman should look like.

Chris Wallace, a former employee at Les Deux Cafes, said of Michèle, “I’d already heard from several sources that she was a fantastic character—a Bedouin maybe, a vampire, ageless, ancient, witchy—and still I was awestruck in her presence. Her heavily hennaed hair was capped in a gangster-style do-rag, and little jets of kohl were purposefully drawn down over her face. Her fingers looked as if they’d been dipped in an inkwell.” 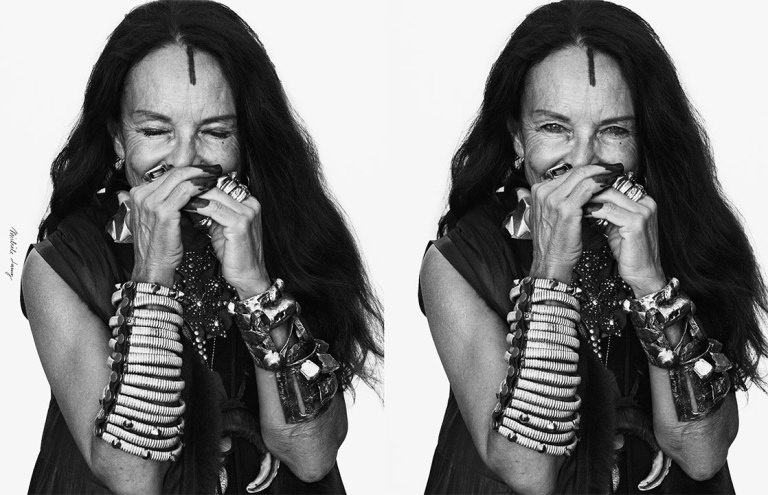 Lamy is not overtly concerned by gender norms, societal ideas of what is or isn’t appropriate to wear or frivolous fashion dictates. Lamy ritualistically draws a vertical line on her forehead every morning, when questioned on this she said, “I don’t know if it was something aesthetic or if, instinctively, I feel more proportionate like this. I don’t know. But I know that I don’t feel good without it.”

Michéle’s appearance is defined and distinctive; this showcases her aesthetic and allows her to easily identified. Her love of long-line clothing, leather and dark shades draw an easy comparison between her and a cartoon-esque witch but there is also a ritualistic element. Witches are ritualistic – spells, potions and incantations need ceremony. Michéle has adorned herself through tattooing (her fingers and make-up), drawing (the line on her forehead) and cloaking. These rituals have all culminated in her inimitable appearance.

She has dictated her own witchy aesthetic, bound by her own taste and ideas of how she wants to present herself. Lamy has designed a uniform by which she is recognised. She is nearly always dressed in black; either leather or deconstructed minimalist pieces accented by heavy jewellery and her trademark black line, gold teeth and ink-stained hands. She is the opposite of the passive, edited, fashionable woman we see filtered through many media outlets. In short, she’s a badass who refuses to be limited by any limitations other than the ones she has set for herself.

“It’s always tights, a t-shirt, and then something over it. It changes, but it doesn’t change every day. I’ll wear mainly the same thing for three months, and then I change to another jacket.” Michèle is in many ways the Rick Owens woman, her voice and her aesthetic is assured and outside the strict rules of fashion and femininity, which we have become accustomed to.

Michèle has in many ways prophesied her own destiny. She, if we’re being honest, has almost definitely taken a few liberties with her biography – and that’s putting it kindly. But in doing so, she has built her own personal history. She isn’t the first and won’t be the last person to build a brand on self-mythology – I’m looking at you, Joseph Beuys.

Throughout her life she has managed to make things happen,  from her own label, to Les Deux Cafes and – perhaps most significantly – her partnership with Rick. Together, Michèle and Rick have created a brand with a unique vision and spirit. Rick Owens the label is decisively not the output of one person; it’s the melding together of Owen’s defined aesthetic and Lamy’s fearless instinct.

None of her success has been by accident. She has placed herself in the perfect position to capitalise on her witchy instincts and mould a successful career, persona and life that fits with her innate aesthetic. Michèle has fulfilled her self-prophesied destiny by living outside the ideals of society and manifesting her spellbinding idea of normality.

Witches are powerful, assertive and exotic women. They were believed to posses magical powers which could control the elements, people and not lest we forget inanimate household objects. Sabrina the Teenage Witch might have had a vacuum, but the witches of lore flew on brooms. This history has cultivated a powerful mythology where women were placed in a position of power – and if stereotypes are to be believed they had a keen dress sense and markedly sexual allure.

Parallels between historical witches and modern witches like Lamy can be drawn. She has power to define her biography, her relationships and her uniform. Lamy created her own mythology – one which feeds her allure and mystic powers.

†Editors Note: Michéle Lamy, like all good witches, is a mistress of self-mythology. To illustrate: We don’t know exactly when she was born, but we know it was probably the mid ‘40s. She would have started studying law in 1962 at the very earliest. In 1962 Gilles Deleuze was working at CRNS (The French National Centre for Scientific Research), which was definitely not a law school. BUT – ah, but! – from 1964 to ’69, he taught at the University of Lyon, which did have a law arm. From there it’s a hop, skip, and a train ride to 1968 and the student demonstrations in Paris. It checks out – but that doesn’t necessarily mean it’s true…

Sarah Commane works in fashion. She tweets at @SarahCommane.

One thought on “Sarah Commane: In praise of Michèle Lamy, the Witchy Woman”