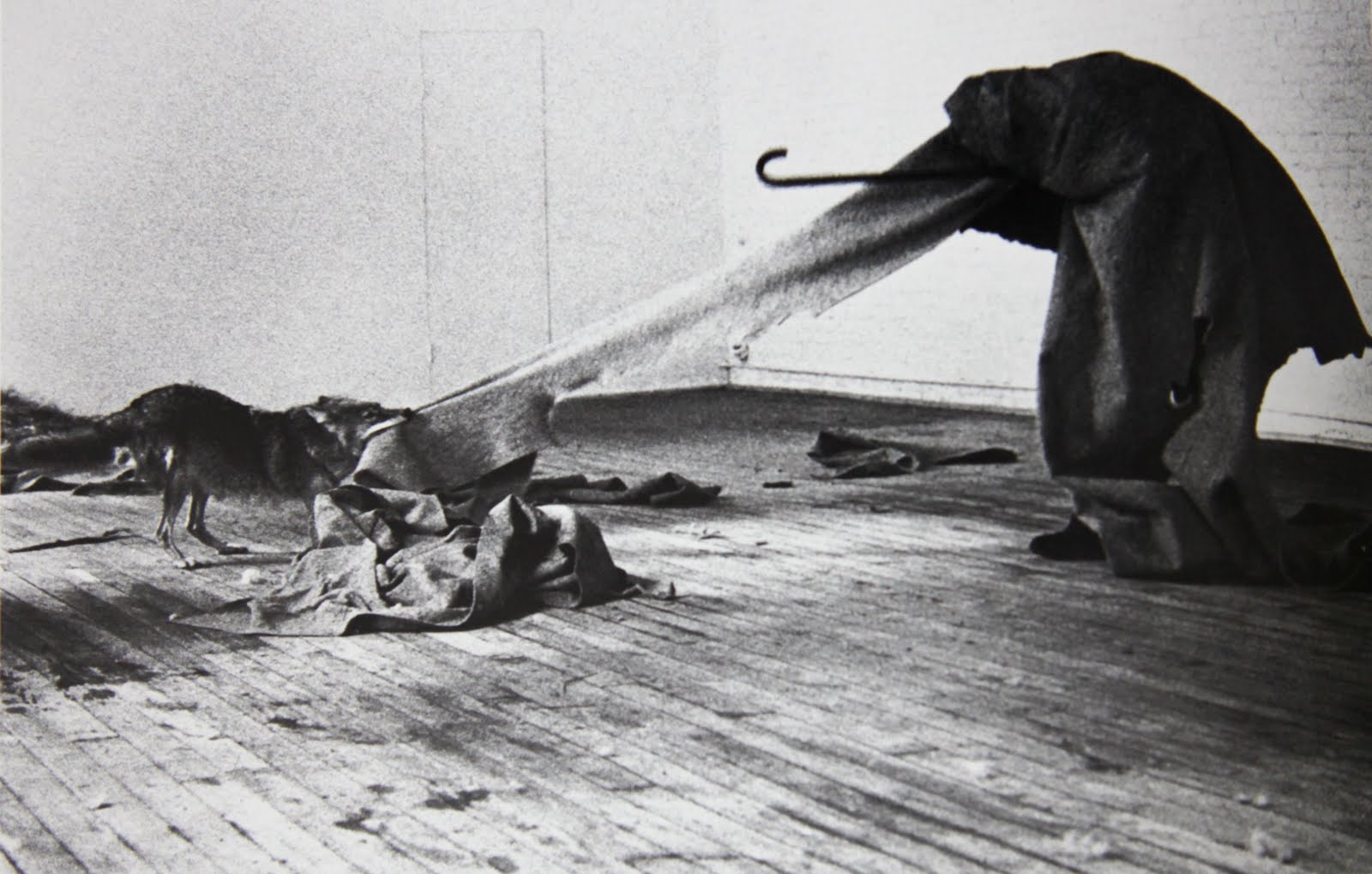 Coyotes have a habit of appearing at the crossroads.

Earlier this year, I found myself having a bad time, for various and vague reasons. Sometimes, every direction looks like a dead end.

I spent my days feeling overwhelmingly unsure of myself, with the only things I had any degree of certainty about were that I felt unhappy and that I felt stuck. During this period of malaise, which seemed as if it would stretch on indefinitely into the future, I clung onto certain things. Pop songs. Images. And the figure of the coyote, running through them all.

Songs can become private hymns. Something clicks (in us, in the song) and we play a track obsessively, hooked on a particular line of melody or snatch of a lyric that seems to sustain us. Often, the most intense emotional cathexis has little basis in the song itself. There’s an alchemy to this attachment, the precise blend of melody, lyrical content, and the context in which you first hear something. In this way, pop songs can become talismanic.

During my blue period, I fixated on two song that had a coyote at their core, ‘Coyote’ by Joni Mitchell, from her 1976 album Hejira, and Sleater Kinney’s ‘Light Rail Coyote’ which features on 2002’s One Beat. I listened to these songs over and over again during my winter (and spring, and summer) of discontent, never fully understanding why the figure of the coyote had suddenly become so vital to me.

These two songs have nothing much in common with each other. They are two coyotes, regarding each other across a canyon.  Between them is strung a lifeline. These songs felt like they mattered, at a time when I was growing afraid that things weren’t mattering any more, not in the way they used to. Parts of me had begun to shut down, but these songs reminded me that lines of contact were still open.

There’s an argument to be made for the coyote as the quintessential American animal. He’s a twist on the American dream, stripped of its glamour and aspiration. He’s hunger and he’s violence. This is what the German artist Joseph Beuys tapped in to during his 1974 performance piece, Coyote, I Like America and America Likes Me. For the duration of the performance, Beuys shared a small space at the Rene Block Gallery in New York with a coyote. He draped himself in felt and enacted private rituals to honour the animal. Each day, copies of the Wall Street Journal were deposited inside the gallery space for the coyote to chew and piss on.

The coyote threads his way through the American landscape. He’s the trickster of Native American folklore, of course, but then there are also his pop culture brothers; Wile E Coyote, piston-legs going ninety as he freewheels off a cliff; animated and hallucinogenic and voiced by Johnny Cash in a Simpsons episode. Spot him in Chris Kraus’s I Love Dick: “If the coyote is the last surviving animal, hatred’s got to be the last emotion in the world.”

Unlike the wolf, his close-cousin, the coyote is not universally liked.

Like all songs, ‘Coyote’ sounds like the first place I heard it, through headphones in a library I no longer have access to. A buttery-yellow bulb suspended above a reading booth, a square window overlooking a dark expanse of concrete, beautiful and lonely in the dusk.

I fell in love with that coyote feeling like I had a purpose. The song had nothing to do with my particular time or place, but as the lyrics say, ‘We just come from such different sets of circumstance.’ Cross-contexts don’t preclude intimacy. The song mattered to me back then, and it mattered even more to me during my time of sadness because it allowed me to recall the purposeful, thoughtful person I was then.

‘Coyote’ is the narrative of a love affair, failed and transitory, between a musician and a womanising cowboy. It’s a melancholy song, a bit rueful – but Jaco Pastorius’s bassline and the cadence of Joni Mitchell’s vocals liven it. There’s a forward propulsion to the song’s sadness, the chance that this mismatched couple might somehow get it together. The knowledge they probably shouldn’t.

Most people agree that Joni’s Coyote is Sam Shepard. (Here’s Chris Kraus again; “It’s why I hate Sam Shepard and all your True West stuff–it’s like analysis, as if the riddle could be solved by digging up the buried child.”) Joni and Sam met each other on tour with Bob Dylan’s Rolling Thunder Revue. Shepard had been drafted in to write a screenplay for a surrealist movie documenting the tour that ultimately never materialised. Joan Baez was there too, and Allen Ginsberg dropped by, and Joni apparently requested to be paid in cocaine.  The whole affair sounds like a mess: the perfect setting for a brief and failed romance.

The coyote has got a ‘woman at home / he’s got another woman down the hall’ and someone on an internet message board suggests that one of these women is Patti Smith. Smith is another of Shepard’s former lovers, so this punk cameo sounds like it could be plausible, but the chronology is all wrong. Shepard and Smith’s affair lasted a few months in 1970 and 1971, and a once-off performance of their collaborative play Cowboy Mouth. The Rolling Thunder Revue came along four years later. (Patti Smith had been asked to join the tour, but she declined.)

There’s an enjoyment to this detective work, sure – pop song as roman à clef – but it’s also beside the point. In many ways, it doesn’t matter who these characters are. Joni’s Coyote is Sam Shepherd, but he also isn’t. The warm blanket of the song changes his shape. There is a body under there, but it’s shifting.

It’s tricky to pin the coyote down.

Like Joni, Sleater Kinney’s coyote was inspired by truth. In their case, it was a real goddamned coyote who hopped on the light-rail train from Portland International Airport in the winter of 2002. A newspaper clipping shows the animal, curled up on a seat. He had a whole carriage to himself, but it didn’t last. The airport’s ‘wildlife specialists’ (who knew?) were alerted and came to collect him, releasing him back into the wild.

Out of this image pinballs a story of youthful desire: the desire to move, to get out, to fling yourself into the thrum of a city. It’s Portland-specific (‘and Burnside will be our street / where the kids and the hookers meet’) but more broadly it’s about the desperation to escape your context, to throw yourself into something more, to ‘drink in the hope that the city brings’. It’s a kind of origin story for the band, who burst out of the Pacific Northwest in the mid 1990s. Young kids, craving something bigger, more expansive, more thrilling, than their own beginnings. ‘Light-Rail Coyote’ about deriving energy and solace from art, community, friendship.

Sleater Kinney’s coyote is one of the city, not of the True West.  His energy is faster, more desperate. The guitar line moves like a holster around your hips, or a metal hula-hoop, swinging.

There’s an ambiguity to the image of the coyote. Held up to different lights, he can alternately look like a hopeful symbol or a bad omen. But he’s worth looking at, all the same.

Joni looked the coyote right in the face. It’s not clear what she thinks of him.

Her coyote is a bit of a dick, sure. He’s a womaniser and he has violent urges and he’s a spy, ‘peeking through keyholes in numbered doors’, but also he’s got a certain pathos.  ‘Coyote’s in the coffee shop / staring a hole in his scrambled eggs’: reflect on the loneliness of that image, the specificity. He’s a predator, but she sees him and in this seeing gains – something.

This power – of seeing, being seen – is also there in ‘Light Rail Coyote’. ‘A kid from a Western town / wants to be seen and go out’, Corin Tucker sings, and nothing seems more urgent.  Sometimes it’s necessary to look things right in the face, even if you’re afraid of what you’re going to see.

I pinned a picture of Portland’s fugitive coyote on the wall above my desk. He’s huddling on the seat, facing the camera’s flash, looking calm even though he’s out of his depth. He looks a bit sneaky and there’s a hope in that.

Both of these songs are about being trapped in your environment and summoning the will to transcend it. It’s difficult, they know. When Joni sings her song’s refrain, ‘No regrets, Coyote’, it sounds like she’s trying to convince herself of it more than anyone else.

Movement is always possible. Hear it in the bridges that structure ‘Light-Rail Coyote’. There’s always a way forward.

The coyote takes what he can get. And in this way, I slowly learned to live with my tools. To notice the situation I had found myself in – taking stock, taking pleasure in what I could – and then to move on.

I kept an eye on that coyote above my desk. I ran along the seafront, his song pulsing in my ears, feet pounding to the beat of Janet Weiss’s drums. I listened to Hejira and I waited and I began to grasp the sense, suggested to me by these coyotes, that there are two paths to recovery: reflection and propulsion. The need to push forward and the need to think things through. Giving yourself time, but also keeping going.

There are longer, fuller pieces to be written about being a fan of Sleater Kinney or of Joni Mitchell. I’m not necessarily the right person to write these. When feeling my way towards this essay, it felt more accurate to describe myself as a fan of the coyote, however oblique or perverse that sounds.

Does anything that I’ve said to you explain why this might be the case? It’s all highly particular to me, I’m aware. It’s specific and it’s sideways, but it lifts me out of myself. And that’s all I can hope for. These songs provided me with a way of accessing the person I once was and the person I could be. You’ll know this feeling, even if you don’t know the coyote.

Coyote is a strength, a loneliness, a wildness. Coyote is crossing paths, for a moment, and recognising something. You see, you are seen. The coyote is seeing things from a distance, catching a sudden glimpse, a shiver of anticipatory recognition.

This, too, will pass.