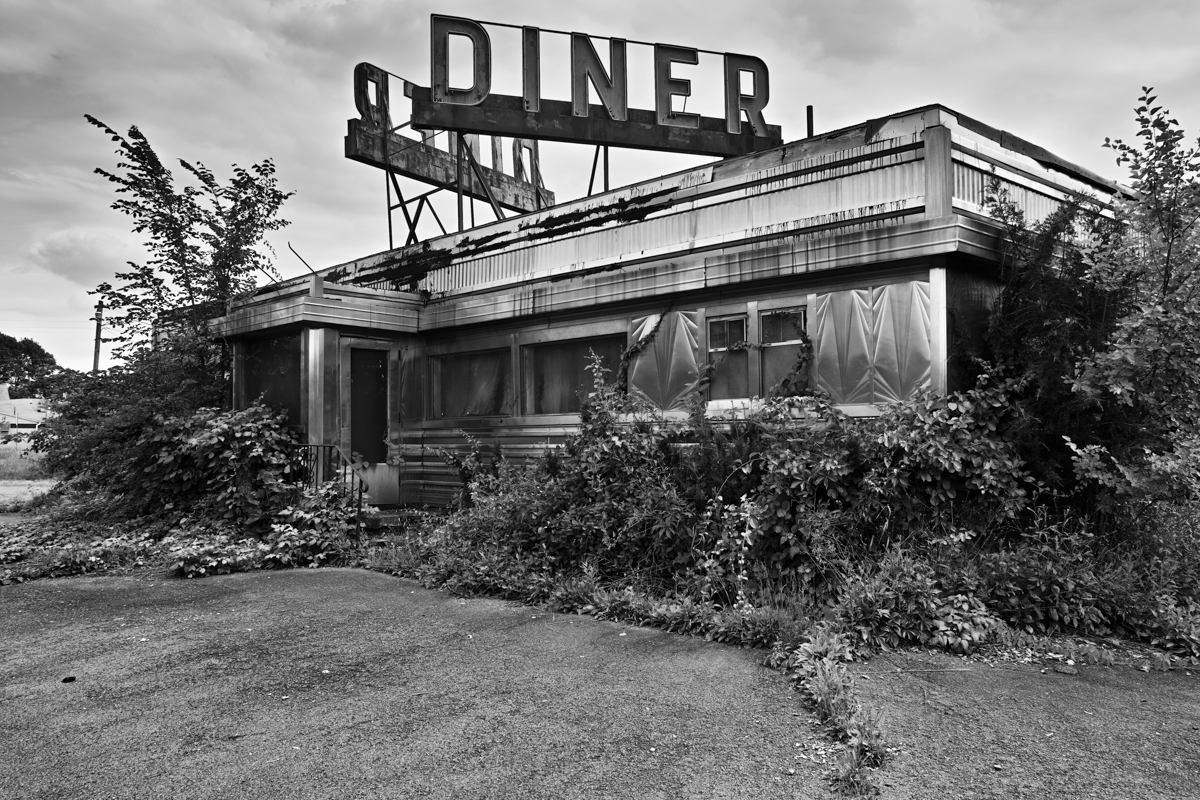 I scroll through Google Image search and I am hungry for things I will never eat again. I can’t tell you everything about it here. I can tell you some things.

From 1994–2016, Booglaoos was a greasy spoon on the corner of 21st and Valencia, in the Mission District, San Francisco. At time of writing, it is closed for repairs after a minor fire.

In San Francisco, closure hovers over all great dives. Gentrification is a bigger albatross; a slower, more realistic disaster. I ate there every week for three years – 2012 to 2015. Alone, often, at one of the small tables amongst the pillared mosaics made of broken crockery and plates, or in a booth during empty afternoons before babysitting gigs, or in the weird swathes of unemployment that came and went. Drinking endless coffees, refilled before the cup was empty, splashed with Half and Half and laced with sugar. Half & Half was a cocktail of milk and cream that looked like white emulsion paint, shiny and thick. Turned any cup of black coffee into a cake, an indulgence rather than a utilitarian beverage, oil that keeps your eyes open, your brain turning.  It sat on the tables at Boogaloos in a silver jug beside the huge barrel of sugar, alongside the ketchup, the hot bright hot sauce in a bottle that I was then too afraid to try; that now I can’t stop thinking about how I’ll never get to see what that burn felt like. House-made fire, some unknown recipe, something I was too conservative with my palate to taste back then.

If I soften my vision, I can pull up their vast menu from memory; their white vegan gravy that came on a biscuit as big as your fist (I learned first here that American biscuits are like our scones, but more savoury, southern things – not Mariettas, or digestives, those are cookies to them) their soft, savory plantain cake with black beans and crema. Their eggs, huge and yellow: learning what over ‘over easy’ or ‘over hard’ meant; this strange American breakfast lexicon. “Poached,” I’d usually just say, at least understanding that.

Sometimes, I’d walk in and Angelo Badalamenti’s strange, drawling score to Twin Peaks would be playing on the stereo over a quiet Tuesday morning. Other times, in the packed flush of a weekend, Jane’s Addiction would strum out over the airwaves. Generally there were throwback jams, ’80s, ’90s. The soundscape mattered, became familiar. How we can find a haven anywhere when we really need one. How a waitress, or a waiter who remembers your name counted for so much.

Here is a litany for Boogaloos. I remember CB’s regular order, and Toaster’s – both boys would get Eggs Bario on the weekend; Toaster would get the avocado-heavy spin on an Egg’s Benedict with fruit, mostly; CB with homefries. I remember Casey would put that hot sauce on everything. I remember Rhea and her daughter sitting across the table from me, tiny Olive eating Mickey-Mouse shaped pancakes, Rhea turning over tarot card after tarot card and whispering things I could feel but not know. I remember bringing Christina there for the first time, how we’d haunt quiet afternoons there and try figuring out how to live in this city, ordering everything from the ‘sides’ section of the menu just to get a taste of all these different things, eating them like breakfast tapas, discovering the plantain, discovering the corn muffin, sourdough and how it always made me sick. Roe slumped in the corner, all angles, pale against the leather of the booth. Getting used to the taste of corn tortillas. Getting obsessed with them. Getting pulled pork tortillas instead of pulled pork sandwiches because sourdough hurt my stomach. Pulled pork, sugar and meat and convincing myself it wasn’t bad for me (it was bad for me) but it never made me sick. Damon’s delight and shock at the first plate of food they put in front of him – how vast the portions, how depraved.

Waiting in line, impatient, grouchy on weekends because there wasn’t anywhere else we’d rather be. Saying goodbye to Hope there. Baruch saying, “Two poached eggs, some avocado, a corn muffin, and two spicy sausages,” and then me saying, “Two poached eggs, some avocado, a corn muffin, and two chicken apple sausages,” even though we were sure the waitress knew already. We’d pick coffee cake apart with spoons before our meal came. In the last weeks before we left, Casey, Baruch, Ceri and I would crowd the booth, me and these three tall, good men, eating, talking about cartoons, refusing the horrors of moving and adulthood, rather eating, feasting, together, before continents would move our lives in different directions. “Breakfast club,” we’d say, as we counted down the weeks, six, five, four – until the end was so close I’m not sure we talked about it at all. It was a cornucopia. A dive. Mine – but not mine at all. Of the neighborhood. Not mine.

I always felt like an interloper in San Francisco, I’ve written at length about alienation and will probably continue to, until the Rubik’s Cube of Why America Made Me So Sad clicks into bright panels of sense – into an obvious lesson. I was at once a colonial invader and a weird pet for Americans to experiment with. White, but still different; on the receiving end of a very specific kind of othering, while still wielding a great deal of power, still being protected. Invisible, but strange. Cleaning houses, doing temp work, still gentrifying.

At bars and parties it was always a matter of time before someone reminded me this wasn’t my city. I loved Boogaloos, certainly. But. It had been around since 1994. It didn’t belong to me. Not even nearly. The city was being emptied of culture while I lived there and I ate, and I ate, and I ate.

After we left America, Eater SF announced the dive on the corner of 21st was up for rent. The required monthly payment to the landlord had been put up to $17,500 a month. More articles bounced back, they were staying, they stayed. I visit San Francisco for the first time since the move in October this year. If their doors are open I will walk in a put a spoon of the hot sauce in my mouth. I will let it burn me.

So here, from my old town, my island, my five thousand miles from the hot sauce I never got to taste and the friends I wonder about every day – here I rebuild the greatest thing from their menu, a temple. A Temple o’ Spuds.

Your ingredients and your method is all in one, this time. Simple, cheap, hearty, mad. A gorgeous mess.

I’m approximating here. This is most definitely not how the magicians in Boogaloos kitchen prepared this dish, this gorgeous vortex of food. Ideal for feeding large groups of people hungover breakfast, a brunch without notions. I’ll tell you how to feed two, but double up depending on numbers and tastes. Use your heart. This isn’t fine dining. This is a dive.

Get three large rooster potatoes, skin on. Scrub them, cube them, lay them out in a big roasting dish. Spray with olive oil. Slice a fat white onion thickly, same with half a red pepper, half a green pepper. Spray with some more olive oil. Season generously – and I mean it, generously – with salt, black pepper, paprika, onion powder, garlic powder – just go in. Crack into it. If they’re looking a little dry? Little more oil. Gauge it as it goes – if the vegetables are too dry with seasoning, they’ll get ashy and burn in the heat of the oven. If they’re too oily, man, you don’t want that. That’s gross. Put the tray in the oven for like, forty minutes, until the potatoes are soft. Check them. Give them a peek as they go. Give them a small mash. They shouldn’t the be structured, sharp roast potatoes of a Sunday dinner. They should be formless. Homefries without the frying pan.

While they’re roasting, let’s get looking at the toppings: The Temple. Chop up a couple of spring onions and a little fresh coriander. If anyone knows anywhere in Dublin where a gal can buy some Monterey Jack cheese, let me know – and also buy some and use it in this recipe – but since it’s a faraway phenomenon, grate some swiss or use pre-grated mozzarella instead. The sharpness of cheddar here is no good. The cheese here is for texture, not to overwhelm the whole thing. Pre-packaged salsa – the fresh kind from Tesco, is great for this too – shoot for the hotter one mind you, I find the cool can be very sweet. Fry yourself up two eggs – over easy, over hard, sunnyside up or down – or just poached. Runny yolk here, if that’s your taste, is on point.

When the potatoes are soft and crispy at once, the onions sweetened and the peppers soft, serve them up. First douse them in salsa, then cheese, then sour cream, then green onions – then an egg, then cilantro then eat your absolute heart out.

If we keep building temples to Boogaloos, then how can it ever be gone. Pepper your temple with hot sauce. Regret nothing.