I like to surround myself with words. I always carry a book in my bag. I read the back of cereal boxes at breakfast. I read articles online as I travel or eat my lunch. I read graffiti, stickers or posters in public bathrooms.

In my four years at Trinity College, Dublin, I read many a poster or Sharpie-d message on the back of a toilet door. I particularly enjoyed a poem on the back of one of the doors in the Arts Block. The thought of someone transcribing a whole poem during their trip to the loo fascinated me; I wondered what led them to pick that particular poem, and why they chose to write it on the back of a door. I like to think they were trying to bring a bit of the beauty of nature to that stall with its eerie blue light, rather than an exam cheat sheet.

I am intrigued by how toilet doors and toilet roll holders encourage people to spill out their worries and secrets. Toilets can be places of refuge. I know I am far from the only student who hid out there when feeling overwhelmed by the pressure of college work, or the sheer volume of new people I was encountering. Apart from being a useful place to complete bodily functions, the toilet is a place where you can be vulnerable, can be on your own, can cry. I think it is this feeling – of locking yourself in the little cubicle, of holding yourself together – that has led so many to dig a pen or marker from their bag and scrawl a confession to the porcelain agony aunt.  It is touching to see students offer advice or console each other.

Elsewhere in the Arts Block, there is a poster for therapy on which some students have written notes recommending the free counselling services offered. I also enjoy the words of encouragement written on the walls. Obviously some toilet graffiti (‘X was here’ or ‘X & Y 4eva’) can just be plain annoying, but a lot of it is comforting – or thought provoking.

The back of one toilet door meant more to me than any other. One day, when peeing, I looked at the poster on the back of the door. The poster was about STIs and the importance of using condoms. On the poster, someone had written about being seventeen and a virgin, and feeling like a ‘sap’. This started a conversation.

Other students reassured this girl that she wasn’t alone (‘19 and never had a boyfriend’ and ‘21 & a virgin, it’s nothing to worry about!’) or shared their experiences of having sex for the first time. For the most part the words were those of comfort and solidarity. It has become known to other students as ‘The Virgin Toilet’. Much of the original poster is now obscured by the discussion of sexual experience and inexperience. I made a point of going to this particular toilet when nature called; reading the new comments on the poster and feeling the familiar sense of reassurance that I wasn’t the only one with this (not particularly) dirty little secret. I added my own message. I remember the thrill of this little act of vandalism (I am a bit of a goody two shoes) and also the relief in admitting, if only on an already graffiti’d poster, something I had been keeping to myself throughout my time at college.

This poster made me realise I wasn’t alone, and made me feel less stupid for feeling anxious about the fact that I hadn’t had sex. I don’t believe anyone should be defined by their sexual experience (or lack thereof) and I feel far too much emphasis is placed on sexual prowess. However, I also worried about not knowing what to do when the time came, or being expected to be totally up for sex when I totally wasn’t.

I didn’t have sex at university. Like the girl who wrote the first message, I worried that this made me weird. This now seems like a very teenage worry, and I often felt immature for being concerned about it. The dominant image of being in your twenties is having a wild time, having fun, having sex. I felt that, at this point, I would be expected to be cool with sex, to know what I was doing. And why wouldn’t I, when I was reading sex columns in college magazines or staying silent during conversations about sex with friends or classmates? I was terrified of being found out.

Games like Never Have I Ever or  Truth or Dare  filled me with a sense of deep fear and dread that the true extent of my inexperience would be revealed. It’s not cool to talk about being a virgin. I definitely didn’t think I was the only virgin in college, but I certainly felt like an anomaly. I felt like I seemed repressed, like my sexual inexperience clashed with my feminism. Because feminists should be sexually empowered, owning and enjoying their bodies; and I was in my twenties and no more experienced than I’d been in my teens. Frankly, I was embarrassed.

In an article from the feminist website The Vagenda entitled ‘Does Feminism Have a Problem with Virginity?’ the author states, “any woman (not to mention any man, any human at all) has the right to choose to have sex with zero partners. These feminists never seem to show up on TV; they’re never given a high-profile platform through which to speak or write.” We rarely see characters who are comfortable with their virginity – it tends to be a yoke they are desperate to throw off. In this way, the shame and stigma around being a virgin when you are in your twenties (or beyond) remains.

As Jessica Valenti has written in The Purity Myth, “virginity is just too subjective to pretend we can define it.” There is no medical definition of virginity, and different people have different definitions of what constitutes ‘losing it.’ The traditional idea of penetrative sex as being the way you lose your virginity is heteronormative, and erases a whole realm of sexual experience (on the poster someone wrote ‘Try lesbian sex, being with a woman is amazing!!’ to which a pee’r replied ‘AMEN’ – circled for extra emphasis). The idea of ‘losing it’ is in itself problematic, as if we are somehow less after having sex for the first time. More than once in college I was called a prude.

Slut-shaming is a big problem, and it can be seen on this poster too. Some people have written in The Virgin Toilet about their sexual experiences, ranging from stories of first times they regretted to ‘sex @ 16 no regrets.’ Others wrote ‘slut’ or ‘liar’ in response to these comments. However, there is also shame around virginity and some of the comments on the poster mocked those who hadn’t had sex; there were comments about how we needed to get laid such as ‘You’ll all be virgins a lot longer if you write on STI posters to get your kicks.’ While people are quick to call out slut-shaming, virgin-shaming tends to go unchallenged.

Personally, I feel there is still a lot of stigma around virginity and a lot of shame around admitting that you haven’t had sex yet. And yet, it’s clear that women can never win in either situation. If you’ve had sex you’re a slut or a whore, if not you’re frigid or a prude. Interestingly, though, all the commenters on the poster are presumably women, showing how such patriarchal notions as the virgin/whore dichotomy have been internalised and how much we judge each other on sexual activity or lack thereof. As the author of The Vagenda article mentioned above writes, “[w]ho a woman screws does not build or reduce her worth, and precisely the same is true of whether a woman screws.” 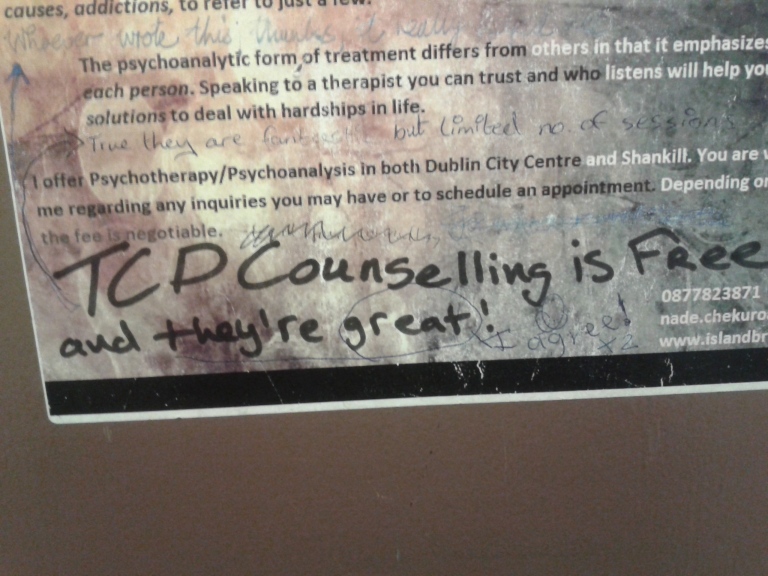 I can only speak from my own experience. I can’t say why the other contributors to this poster felt drawn to it. I don’t know whether they felt the same sense of unburdening or community as I did, whether they even recall writing on this poster. I don’t know why any of these other women were virgins. Some people wrote about waiting for the right person, but in most cases it doesn’t say whether people were virgins by choice or not, whether they had religious or moral reasons for not having sex. And it doesn’t matter.  What matters is the sense of having a space to discuss this experience, even if that space was a poster on a toilet door.

Since writing on that poster two years ago, I have gained more confidence in myself and see that I had nothing to be ashamed of. But even now, I was hesitant to write this article. I thought about backing out. I was making myself exposed and vulnerable. An article, under my name, on the Big Bad World of the internet seemed a far cry from an anonymous scrawl on a poster in a college toilet.  But when I felt those familiar feelings of shame and inadequacy, I decided it was more important to push myself, to move this conversation from the back of that toilet door. My knowledge of and understanding of feminism has also grown, and I now see that feminism and virginity are not incompatible. In fact, I have come to see doing what I want when I want with my body as a feminist act.

The poster is still there, albeit in a very tattered, torn and faded state. Like the discussions on toilet roll holders about the pressure of coursework, on the back of toilet doors about feminism, on toilet walls about broken hearts, The Virgin Toilet offers a sense of comfort; a safe and anonymous space to share fears and worries.

Jenny Duffy is a book-selling, tea-drinking, gallery-going kind of girl. She dabbles in various forms of writing, and is currently writing a poem a day for the #NationalPoetryMonth challenge. She tweets at @Jenny_books_art.