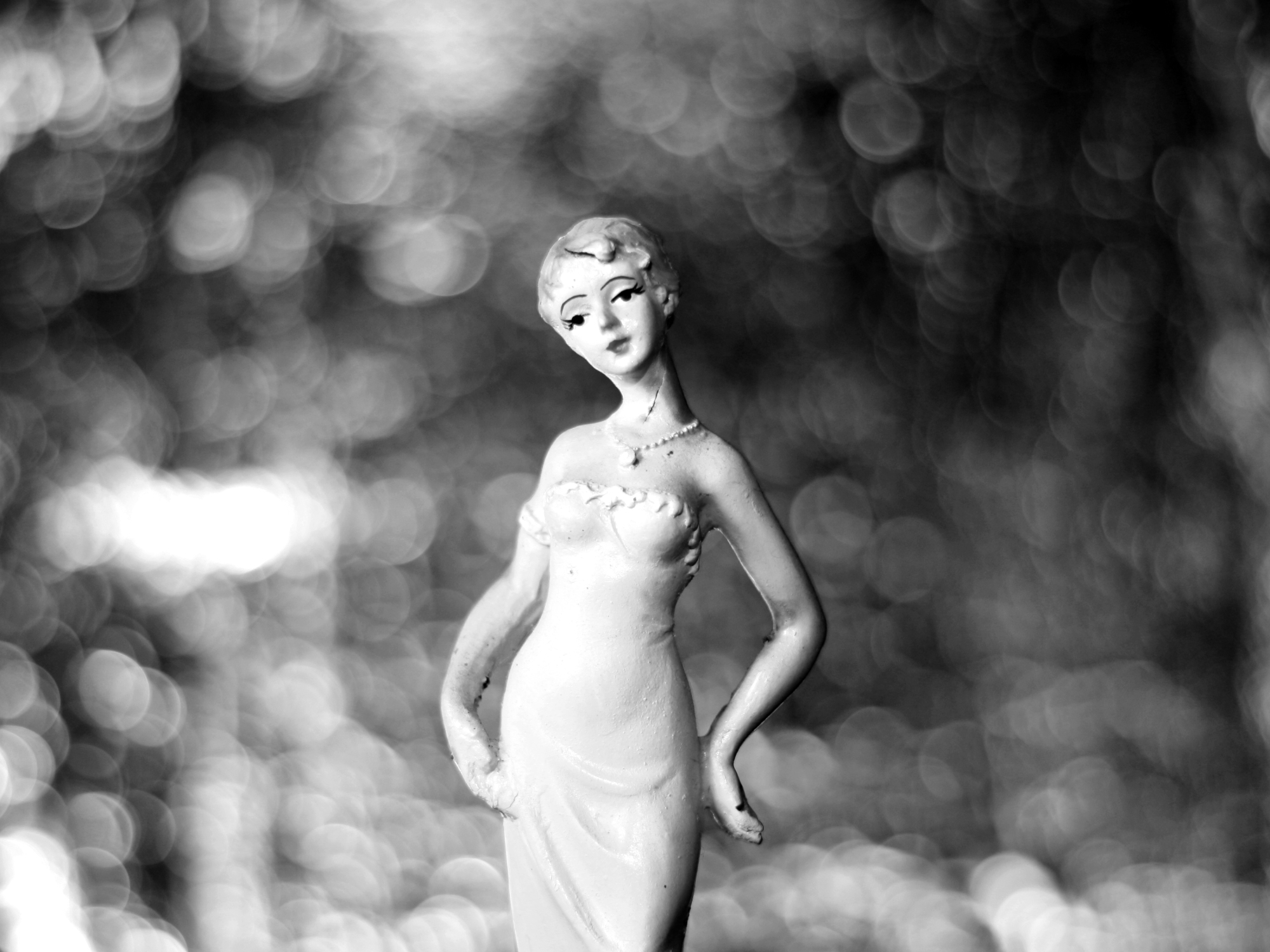 I have always wanted to be a slut. Samantha from Sex and the City-style. To fuck around with reckless abandon, zero care given to prowess or experience or ability. I don’t remember ever associating the word “slut” with bad things. Having sex seemed a noble ambition given the lack of options in my teen years. I grew up surrounded by the type of enticing prospects you’d consider only if the alternative was jumping in a vat of boiling acid, so I figured I’d wait patiently for college and the inevitable ensuing of debauchery.

I’ve been to college, mystical land of discovery and adventure, and had all the glorious rites of passage except the incessant sex. I thought this was a thing that happened. Everyone said it. You will never again be surrounded by so many enthusiastic potential suitors in one hormonal, responsibility-free bubble, yet somehow I managed to fail utterly at taking advantage of that. I had some hookups here and there. Sporadic one night stands and brief encounters seemed easy enough in the first year, but they lost their lustre very quickly. I found myself frowning. I still wanted to get around, but options were elusive. I wasn’t as comfortable as I once was. Something was missing from my script.

Mission Slut was not going according to plan, but I emerged from college with renewed vigour. Emboldened by a newfound resolution that boys at college are actually undesirable nitwits, I entered the real world fully ready to compensate for my few years of nothingness. It seemed like a tragic waste, really. I consider myself to be fairly alright-looking (the highest possible praise in the post-Catholic guilt of an Irish mindset), smart, good company and obviously hilarious. I’ve been single and ready to mingle forever. But no one’s mingling. They’ve huddled away in distant groups, meticulously avoiding me just as meticulously as they mingle with other people. Friends swiftly coupled up in the barren wasteland that is the post-college era and it wasn’t long before I found myself like a child at a dinner party – wandering downstairs unannounced, eliciting a fond chuckle from knowledgeable guests before being patted on the forehead and sent back up to my room. There’s a more succinct way of putting this, as borrowed from Mean Girls: you don’t even go here.

Confused, I turned my stupefaction inward. Was there a *slight* possibility my problems stemmed from unrealistic expectations? I can hear the laughter track from here, inter-generational belligerents. You’re looking at that carefully-maintained “MILLENNIALS amirite” checksheet and underlining all the clichés which apply. But the real world was not all it seemed. It wasn’t a thinly written but nutritiously cheesy female coming-of-age movie, where friends unite to take on the world and intensify their bond while picking up delightfully vanilla male suitors along the way. No, the real world looks more like the auspicious beginnings of a house party. There’s food, drink, a good playlist and plenty of potential that the night will be class, so long as people bother to show up. I remember reading a quote by an author (whose name now escapes me) where she talked about the value of failing early in life so as to provide inspiration for creative endeavours. She wrote, “imagine you threw a love affair and no one came”. Carve that one on my tombstone.

I realised that I found personal relationships truly perplexing. I construed them carefully from the outside, polishing my horn-rimmed spectacles. They definitely seemed to start off very strangely. A careful combination of leading but generally non-committal statements occasionally uttered in casual conversation but more often imparted by text and accompanied by strategic emojis. These are intended to steer the conversation in an implicit direction. People jump backwards through flaming hoops to disguise yet subtly convey their feelings, assuming the other person will see through this theatrical farce and have the gumption to make a move. It was and remains sincerely baffling. Almost as baffling as the fact it’s (apparently) common knowledge and practice. I can’t tell you the number of times I furrowed my brow over a weird text or wondered aloud why someone kept contacting me only to have a friend gaze at me pityingly and say “er, duh? He’s flirting with you.” Urban myth has it that my picture is in the dictionary next to the word “oblivious”. I am, as Cher Horowitz would say, adorably clueless. Was there ever a time when people just straight-up said how they felt, or is that another of the lies my precious movies have foisted on me since birth? You don’t have to do it in the pouring rain after a melodramatic fight scene – unless you’re into that kind of thing – but honest, even blunt communication MUST be a thing for some people. Surely?

I fell in love for the first time proper when I was around 23. He was foreign and charming, well-read and clever, multilingual and given to well-timed winks. None of my friends liked him. I can’t imagine why. I spent the better part of a year expecting that he would one day take time out of his busy schedule of riding everything in sight to tell me that all the promiscuity was a fruitless attempt to suppress his true feelings. For me, obviously. The worthy alternative on the bleachers to the girls in the cheerleading squad. I compiled a whole playlist around this triumphant last-minute reveal, completely failing to realise that taking romantic cues from Taylor Swift songs is never a good idea. When it crashed and burned, I wallowed.

It’ll probably come as no surprise to you to hear that I’ve been single for all of my twenties. I know of at least one other person who had this experience, so we’re not an entirely rare breed – just vanishingly uncommon. It is always amusing to see the swiftly-retracted eyebrow raise of a newcomer who, upon learning of my terminal availability, looks me up and down and opines, “Why?” Why. As though I’ve been deliberately holding out to make a point. It hasn’t been a choice, lads. Tequila is a choice. Singledom is not. (At least, not for me.) By definition, it can’t happen without your desired partners obligingly deserting you en masse. Funny how this is the one thing at which all the men in my life have been singularly competent.

The would-be slut lingers in an unenviable predicament. She sees the end of her twenties approaching, acutely aware of the fact all her intimate experiences come from one-night stands and drunken dalliances. She frets, wondering if there’s something wrong. Around her, friends and colleagues develop easy, seamless relationships with what appears to be zero effort. She does not resent or begrudge this but hopes that someday she can bring her own anecdotes to the table. While she waits, she listens intently, trying to discern the secrets of sex. A fascinating picture develops. Apparently, there are strange noises and smells. Lights on or off is a big deal. Shower sex is awkward and impractical, and people don’t actually like condoms? The more you know.

I scribble these notes into an imaginary notebook stored deep in my mind. I peruse them on nights when I’m about to fall asleep, only for my brain to decide it’s a perfect time to dwell on the incomprehensibility of human interaction. Like quantum mechanics, multiverse theory and the scope of the universe, it is vast and unknowable. It may contain multitudes. The Terminator sums up my predicament best when he replies to idle chatter about relationships: “My database does not encompass the dynamics of human pair bonding.”

I learn that sex (apparently) becomes less frequent over time. This is worrying. Does that mean my odds are declining by the year, as people get older and less bothered? I’m sure this seems silly to many. There are much worse things in the world, and I don’t for one moment pretend like I’ve been seriously disadvantaged by all this. Just indulge me for a moment and call it FOMO on an industrial scale. My ire should probably be directed at the relationship-centric romance-obsessed heteronormative shitstorm of a society which makes people feel like hopelessly inadequate failures if they haven’t paired off by a certain age, but I too am getting older and I need a nap.

I emerge from the nap. And wait a minute! Things are about to get very interesting. Almost three decades have gone by and I remain utterly preoccupied with the missing pages in the screenplay of my life. I decide to clean the spectacles again and look closer. (This is code for “get therapy”.) I discover fine print. And footnotes. Wait a minute. The pages aren’t missing. They’re just written in a different hand. I’ve managed to completely overlook the part where I might actually be…gay.

A klaxon goes off. This is stunning news. I sit back and gawk, wondering how someone so completely blind to the workings of human sexuality could possibly have missed this fundamental aspect of her identity for so many years. The poor therapist who inadvertently helped wrangle this revelation out of my addled subconscious is still reeling, and probably wonders what she did to deserve such a ridiculous client. I look through the list of women (both celebs and everyday belles) who helped confirm this madcap notion and adjust my way of thinking. Historical revision ensues. Were all those unrequited crushes on men deliberate on some level because the lack of reciprocity meant I never had to worry about follow-up? Did they appeal out of sheer heteronormativity, given I now realise I was never all that interested in pesky things like feelings and emotions and much more preoccupied with keeping up with my friends? Being single only really started to get to me when I was the only one doing it. Determined not to be left out, I launched myself at romantic life in the only way I knew how only for my subconscious to discreetly sabotage it for just long enough for me to come around. Good job, brain. I appreciate it. In a world so given to policing sexuality, maybe this isn’t all that rare. Even those of us considered psychologically astute have ways of looking past the deeper parts of themselves.

Armed with this new understanding, I find a telling resurgence in interests. To date, and mingle, and meet people. Invigorated anew, I set out to enthusiastically seek women, feeling excited and bold and adventurous at last. Maybe Mission Slut is ago after all. The older version of me is much more taken with Samantha from Sex and the City‘s professional acumen and forthright sense of self, but to boldly self-liberate sexually is a worthy cause and it’s eagerly underway. The game is afoot, Watson. Suddenly everything seems so clear.

NOTE: Guess who’s not (yet) out to a great many people! For this and other reasons, dear reader, you’ll have to live in permanent wonder at who wrote this magnificent thing.